— You are only 24 years old and you already have a Michelin star. The views of half of Italy are riveted to your personality and in my opinion, you have already achieved everything that can be achieved.
— Honestly, it seems to me that we still have a lot of work ahead, a huge number of projects, improvements, both personal and professional that need to be done day after day. And then there is always another second and third Michelin star, for which you also need to compete. One of the most famous slogans of the restaurant Bros’ :” The most important thing you can taste. ”

— Which product in your opinion is the most important?
— Ricotta, lobsters and sea urchins. There is a special type of ricotta – saturated and fermented. We ferment this variety on our own, following one very old traditional recipe and technique that is specific to the region and this particular technique gives the ricotta a rancid taste. It is also worth noting the special tenderness of langoustines and the salty-bitter taste of sea urchins.

— And as for work?
— The most important thing in work is order, discipline, the ability to set a goal. If you do not have at least one of the criteria listed above, you will not be able to move on in any direction. — As for the ancient forefathers tastes in your restaurant, in addition to rich ricotta, the menu also contains other dishes, namely offal, garum (a special sauce that is obtained by soaking and infusing certain types of fish), lard. That is why your menu can be called an ode to the tastes of the Puglia region.
— Indeed, at first glance it may seem that these dishes are too well known and studied to the smallest detail, but in fact these ingredients represent the heart of our achievements. For example, for many people the bitter taste is taboo, while for us – Salentians – residents of the Salento region, this taste is traditional. That is if you say bitter, you want to say Salento.

— In the menu of your restaurant you can read the following phrase: “Light Asian notes, a desire to preserve, give a new life, serve old recipes in a new way.”
— Yes exactly. Because if we do not do this, then who? We are a new generation. This means that we have a duty to betray the importance of our past. We set ourselves this goal, we use ingredients and techniques that have long gone out of fashion.

— How to serve bread and pork fat as amisbush? Contrary to all the restaurants that are “discovering” just now for themselves the paring of bread and butter before moving on to the main dishes.
— Pork fat has been considered our national ingredient since ancient times. Olive oil has always been abundant, both earlier and now it is an important ingredient. As for butte we never had it. But there were pigs and it is important to note that no one had previously suspected that fat could also be obtained from a pig. In the Bros’ restaurant we whip the lard, turning it into a cream, process it with smoke and combine it with raspberries.

— Please tell us a more detailed story about saturated ricotta.
— In ancient times they always prepared a little extra ricotta, and this extra part of ricotta was placed in an amphora not according to the traditional recipe and a little more salt was added than usual. Then they left it for some time and later a fermentation process took place with ricotta, a specific rotten smell and taste appeared – these are the characteristics that connect our generation with the ancients. — You position yourself as an absolutely perfect brand. You are not just a restaurant – you are not just a chef as a character, you are communicating with the media, your dishes have a distinctive feature – your logo, you have an online store of T-shirts. You also have a line of dishes, which is made using the traditional pottery method for your region. You are actually a new generation, but among other things you have professional wisdom that is not inherent in the new generation which is very mature.
— What we do is called very simply: use the moment, technology and all the tools that you have at your disposal. We are millennials, we were born in this era and it would be foolish not to use everything, not to do our best to sell our brand. Yes, that’s right, even presenting you dishes we serve each ingredient with the letters of the name of our restaurant.

— You are in the kitchen and your guests are sitting in the hall. How do you communicate? Only through the dishes?
— This is an absolutely automatic process. After all I cannot create if I don’t feel what I am cooking from the inside. Each dish created by me passes through me and turns into an emotion, a message. For example, when I cook you an appetizer of lemons, I want to make it clear that at a certain period of the year we, the inhabitants of the Puglia region, eat this dish as a side dish. Or another example with a standard serving, a dish that consists of only three ingredients which has a very clearly defined taste, I want to show that it is these three elements that fully reflect our character.

— Watching your work in tandem with Floriano, it seems that it is the pair work that is the secret of your success. There is no feeling of a struggle for a professional reputation or personal. You do not compete, you work in pairs. And your example is not the only one in Italy. Since many chefs in Italy show exactly the same example of successful work in pairs.
— I do not know if this is really a secret but we actually managed to find a way to create our team. We are calm, purposeful, always sincere and above all we remain ourselves. It was this behavior that allowed our rhythms to converge perfectly.

— Isabella, share with us if there is such a dish that encourages you from your past. For example, when the smell of a dish takes you to a certain point in the past.
— Certainly, for me it is the smell of our traditional lemon, which grows in our Salentian region. Since childhood we have been picking the fruits of a lemon tree with my father in order to make an appetizer of it in the evening. We cut it into thin slices so that we could completely envelop them with sugar. There is no more accurate combination of tastes that could describe my childhood than this particular taste.

— Therefore, I imagine that you have a dessert menu in which you glorify each of these memorable moments.
— That is right, citrus fruits are the main characters of our desserts in any season. At the moment, I consider my main dish pear in a sour sauce made of bergamot and caramel. I also recommend lemon soufflé and licorice, even earlier – instead of a lemon with sugar there was a grapefruit tart.

— Well, as far as I understand, you can cook from anything you want but surely there must be some special recipe that you get the best.
— Yes, it’s a souffle. I just love to challenge both myself and those for whom I coo, choosing the most unusual ingredients for soufflé. For example, vegetables, celery or beets. And it is important to show that one can also make a very tasty and sweet dessert from these ingredients.

— What is your very first memory of the kitchen?
— Oh, the clearest memory: I stand, all smeared with raw mascarpone over the work surface while my mother explained how to cook tiramisu.

— What do you think of those who do not recognize the Michelin star?
— We are talking about chefs who are not interested in titles, they want to be free from any standards and parameters that you must observe when receiving a Michelin star. This is a very serious responsibility which requires constant monitoring and perfection in everything.

— What allows you to live is reason. Bread serves only to saturate you (Latin: Lu giudiziu è ca te campa, lu pane quantu pare ca te binchia).
— That is what the very famous Salentine proverb sounds like which we love to use in order to add drama to our work. Because in the end, food is needed in order to live and not in order to exist.

(original of the interview https://www.marieclaire.com/it/food/a26848047/isabella-poti-ristorante-bros/) 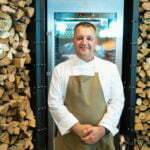 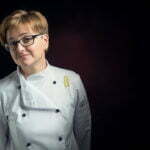