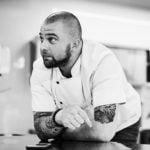 “All about meat. The best parts of carcass. From supplier to consumer. Ripening and storage of meat"

Aleksey has been working in the restaurant business for 15 years already, 8 of which as a chef.

He studied the basics of culinary in Odesa academy becoming a 4th level cook. He took an apprenticeship at the Basque Culinary Center (San Sebastián, Spain). Later – at the Italian Culinary Institute (Calabria, Italy) being mentored by the president of the Italian Chef Association John Nocita.

Aleksey is the chef at the Meaty, Masculine, Multinational Restaurant BEEF meat & wine. The main specialty of the restaurant is meat. It is cooked on a four-meter Parrilla grill and in a wood-burning stove. For steaks, Aleksey uses the marbled meat from the organic farm Creekstone Farms (Kansas, USA) followed by wines from a rich enoteca.