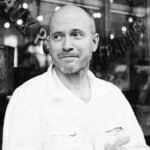 "Baking traditions in France. What is the difference between a baguette and a traditional baguette, a croissant from a croissant with butter. The status of artisan bread"

Christophe was born in Haute-Savoie and graduated from the school of commerce, to which he devoted about 10 years. In 1996 he moved to Paris and began to equip his life in a new way, and already in 2000 the future Baker became a teacher at business school, simultaneously combining this with a certificate of professional qualification (CAP).

In February 2002, after studying at the National Institute of Bakery and Confectionery (INBP) and 3 weeks of practice with a Parisian Baker, Christophe opened the doors of his bakery Du Pain de des Idées.

Du Pain de des Idées is a store, which was built in 1870 and located on the corner of Marseille and Yves Tudique streets in the very center of the 10th arrondissement of Paris, and it also belongs to the list of historical monuments. The painted glass ceiling, stucco molding and hanging mirrors testify to the architecture of the late 19th century and give this place a special charm. Inside, one can discover simplicity creating intimacy between seller and buyer. People do not just come here for bread... They try, discuss, exchange ideas and eat here!

Christophe Vassor presented an amazing recipe for a special bread called “Bread of Friends”, which has become recognized by many Chefs and Restaurateurs of such establishments in Paris as Frenchie, Saturne, Alain Ducasse au Plaza Athénée. Initially, bread was developed for his family and this bread is the result of careful work on the selection of grain, flour, as well as the miller, who understood the baker's expectations. Combining the aromas of wood and chestnut, this bread perfectly combines a thick and crispy crust with a dense yet soft crumb. One and only recipe contributed to the fame of Christophe's bakery.