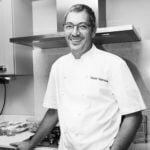 Daniel grew up in the Franche-Comté region of Eastern France, where his culinary preferences were shaped. The chef announced his ambition to become a cook at the age of five, and gained primary education on his grandparents’ organic farm hunting with his father and from the daily visits of fishermen selling their products door-to-door.

At the age of 15 he started attending a culinary college, after which he had a three-year education at Michelin-starred Yves Lalloz’s restaurant in the resort town of Luxeuil-les-Bains. The restaurant is situated at Hotel Beausite with an adjacent farm, which gave Daniel the opportunity to work with fresh farm products. He further worked in Singapore, Portugal, Sweden, and Great Britain.

In London Daniel was working at famous Le Gavroche under the direction of Michel Roux, later on — at Jean Yves Schillinger’s two Michelin stars JY’s (Colmar, France), at Marc Meneau’s three Michelin stars L'Espérance (Vezelay, France), and at two Michelin stars restaurant at hotel Hostellerie du Chateau Servin. After that Daniel was offered to be the Head Chef at the country house hotel Knockinaam Lodge (Portpatrick, Scotland), where he worked for 7 years and become a Michelin-starred chef.

In Scotland Daniel was awarded the “Chef of the Year” title. He was also awarded a Michelin Star at Harvey’s in Bristol, where he was the Head Chef and manager and maintained the Michelin star at L’Ortolan at Cliveden House, where we moved in 2009. Consequently, the restaurant received the “Restaurant of the Year 2012/2013” title by Decanter magazine, and 82nd place on the list of 100 Best Restaurants in the UK by Restaurant magazine. Heading up The Vineyard at Relais et Chateaux, Daniel decided to go for new projects after 7 years of work. From time to time he would still cook there as a guest chef and would always remain a friend to The Vineyard.

He was awarded a “Rising Chef Trophy 2010-2011” by Relais et Chateau. Daniel is a member of Academie Culinaire, the Chain des Rotisseurs and an honored judge of The Soil Association Organic Awards.
Daniel is an ambassador for the Norwegian Seafood Council, championing Norwegian fjord trout. He is prepared to help device recipes, visit Norway to get familiar with products and bring this useful fish to the retail sector.

Daniel often cooks as a guest chef at events around the world. Among them, Bahrain’s Festival of Fine Food at The Regency Intercontinental, in the Rotana hotels in Dubai and Abu Dhabi, at Gourmet Food festival in South Africa, at Taste of Edinburgh, Taste of London, Henley Food Festival, Foodies Oxford and Foodies Bristol.

He has taught at Anton Mosimann’s academy in London and also in Southern France. In 2015, he cooked on board of P&O Britannia as one of their culinary club’s top chefs.

The chef believes that eating out is one of the greatest pleasures in life, and his mission is to convey it. Daniel takes care of his health, loves sports as much as cooking. In his opinion, French cuisine should be “less conservative, more eclectic”, so he creates light spectacular dishes accented with Mediterranean and Asian influences. Traditional methods such as pickling, smoking, and curing go hand in hand with modern practices.

“Warm, energetic and utterly fascinated with the romance of culinary” is the way Heston Blumenthal describes Galmiche, and it is confirmed by many of Daniel’s appearances on BBC’s Saturday Kitchen and at food festivals around the UK.

The chef has also written two successful cookbooks: “French Brasserie Cookbook” and “Revolutionary French Cooking”. The latter was published in May 2014 and contains the chef's unique vision of contemporary French cuisine. In the book, Daniel reveals how to create a modern dish laced with vibrant flavors, textures, and aromas.

Daniel currently heads up the kitchen at The Gore in Kensington, serving a French menu at the restaurant 190 Queen's Gate by Daniel Galmiche. Daniel has devised a unique French menu with locally sourced products — fresh ingredients, rustic charm, the classic with a contemporary twist.