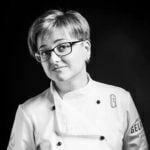 She is a silver medal winner of the International culinary festival “Best Cook Fest 2015” in the “Chocolate sculpture” art-class.

She began her career as a Confectionery Chef at Doska home-bar (Kharkiv) in 2012 and that same year became the Brand Confectionery Chef of PROBKA resto&music hall restaurant (Kharkiv). Later on, she moved to Kyiv and worked for one year as a manufacturing manager and chocolatier-technologist in the Spell company.

In 2017-2018 worked as a manufacturing manager of the Ice-Studio Gelatry (Kyiv).

In 2018 Elina became the Brand Chef and Chocolatier-technologist of the El.f company opening her own same name chocolaterie in 2019.

She was trained by the world ice-cream champion Filippo Novelli and ice-cream master Ciro Fraddanno in Milan.

Elina is the author of three books about the art of confectionery: “Sweet Super-Roulades”, “Melting Pies and Muffins with Liquid Filling”, “Home-made Sweets and Eastern Sweets”. She also co-wrote the book “BISCOTTI and chefs”.