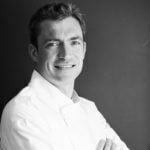 For over twenty years, Franck has been creating the finest gastronomic experiences for celebrities, large corporations and small groups of friends and family. Educated in the French tradition of Traiteur, Franck has introduced to the UK the term “Verrines” – exquisite food beautifully served in individual glasses.

Franck used to be the royal family chef, cooked for Prince Charles. Also, he was the chef at James Bond’s Die Another Day premiere, personally serving Pierce Brosnan; at the premiere of Johnny English with actor Rowan Atkinson. The chef worked at a weeklong wedding celebration of Paul McCartney’s daughter Stella at the Isle of Butte, Scotland.

Franck was born in Paris and began his career at the age of 14 as a butcher’s apprentice. Two years later, he entered a prestigious Parisian culinary school CEPROC where he quickly progressed and was offered a good job.
At the age of 22 Franck was offered a job in the most famous department store Harrods, which is considered to be one of the biggest and most fashionable department stores in the world. There he was responsible for manufacturing and innovations at food halls and banqueting branch. He joined Selfridges, a chain of high-end department stores, six years later where he launched their delicatessen counters in London and Manchester.
Franck then moved to Rhubarb Food Design (Premium International Hospitality Group), where he began working in VIP Rooms at exclusive events and at the homes of many celebrities.

In 2008, Franck published the book “Terrines and Verrines”, which very rapidly became popular all around the UK and abroad, as well as at the famous Books for Cooks shop in New York. Simultaneously he was providing consultancy services for international corporations.

Since 2009 Franck is invited to cooking programs on TV, and the following year he appeared on the list of world's Top 20 chefs in HELLO! magazine. The issue was dedicated to gourmet food and celebrity entertainment. Franck was invited to battle Michelin chefs Tom Aikens, Judy Joo, Martin Blunos and Sanjay Dwivedi on Iron Chef UK. After 3 days of filming and a fantastic experience, Franck becomes the winner. That same year the chef starts teaching at Gordon Ramsay’s Tante Marie Culinary Academy. He worked alongside Paul Rankin, who was the first chef in Northern Ireland to receive a Michelin star.

In 2011, Franck opens a concept restaurant The Glass Kitchen at Harvey Nichols — a luxury British department store chain founded in 1831.
In 2013, Franck was invited as a chef host at Gourmet Week in Courchevel for Supertravel — Luxury Worldwide Travel Specialists.

Having been obtaining various culinary management and banqueting positions at a very high level, Franck is specialized in everything: staffing, budgeting, product and menu development, searching for suppliers, procurement and staff training.

Franck strives to create innovative dishes using products of the best quality only. Whether it is for large corporate events, private parties, or schools and colleges, he has never stopped pushing the boundaries of his creativity and seeks to bring people together around delicious and beautiful food.
At the moment Franck is an Innovation and Development Chef Koppert Cress UK — a large international producer of innovative and safe for food Micro-Greens and cress-salads; he also continues working as a private chef at exclusive corporate events and consults about food and exquisite kitchen setup.