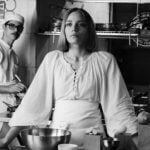 "Creative Process spreads out of our Gustatory Background: our approach to the creation of dishes is strictly tied to our heritage; innovating is the way tradition turns into future; we respect old tastes, bringing them forward through new techniques, products and combinations"

Being only 24 Isabella Poti is a successful pastry chef not just in Italy, but also globally. Her professionalism, determination and sensitive nature conquered hearts of many Italians, when she became a judge on MasterChef Italia 7.

At the age of 9 Isabella already understood who she wanted to be when grew up. Her career began in London with Claude Bosi at Hibiscus restaurant and continued in San Sebastián with Martin Berasategui (three Michelin stars), in Elda with Paco Torreblanca, one of the most famous pastry chefs in the world. Having come to Italy for an apprenticeship, she launched her professional adventures in Bros’ restaurant with brothers Floriano and Giovanni Pellegrino, whom she had met back when studying. After 4 months of the apprenticeship, Isabella started working officially at the restaurant as a Sous-Chef and Pastry Chef, consequently becoming the Head Chef and co-owner. She was listed on the “30 Under 30” by Forbes Magazine in the “Art” category as Europe’s promising chef. Additionally, Isabella became the youngest of three judges on the new cooking talent show “Chef’s Restaurant”, aired on Rai2 since 2018.