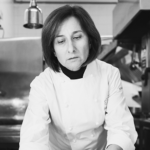 «Evolution of traditions which based on Mediterranean cuisine. New dishes at the junction of different cultures: Ukraine-Italy»

Patrizia’s journey started in 1991, when Patrizia di Bendetto and her beloved Antonio Barraco opened their first pub restaurant on the Tyrrhenian coast in a popular district of Mondello, Palermo.

Back then, Patrizia and Antonio, who married afterwards, already had experience in La Tavernetta pub, which became one of the most popular establishments in the city very soon.

Undoubtedly, among the reasons of their project’s success were Antonio’s experience which he gained on cruise liners and Patrizia’s culinary talent, who learned specifics of Sicilian cuisine from her parents just to hone her skills at numerous courses and internships both in Italy and abroad.

That’s how their next joint project was initiated. Regardless of its slight chances of success, they embarked on it without any hesitation and didn’t even change the unpopular signboard left from previous owners.

The result wasn’t slow in coming as, tired of ordinary life, Palermo locals met the idea with enormous enthusiasm.

In 1997, the restaurant won L‘Espressso award in the category Best bakery products in Italy and in 2010, was honoured with a Michelin Star that, according to the owners, serves only as a next step to perfection and a guarantee that Bye Bye Blues remains a favourite venue for the most demanding foodies.

Managed by Patrizia, Bye Bye Blues becomes the first restaurant in Palermo to be awarded a Michelin Star.

Patrizia is the only female Chef in Sicily who got this desirable award.

Patrizia is a big admirer of the past and traditional cuisine, however, it never impeded her creative energy and boundless imagination.

Also, Patrizia opened a restaurant in Brazil, Bahia region, as a new challenge to herself and the whole world. There she combines Mediterranean cuisine and local products.

Patrizia Di Benedetto is the only female Michelin-starred chef in Sicily. Owner of Bye Bye Blues restaurant in Palermo that has won a number of prestigious culinary awards, as well as a Mediterranean restaurant in Brazil. For 27 years, Patrizia has been working in haute cuisine, following two major rules: attention to the diversity of local cuisine and an ability to achieve its reinterpretation. She has respect for traditional cuisine, however this has never hindered her creative impulse, her imagination is boundless. In the interview Patrizia shared how it feels to be the only female Michelin-starred cook, described her main rules in the kitchen, love for Mediterranean culture, the restaurant in Brazil and her new projects.

— What inspires you for cooking?

For 27 years I’ve been trying to stay in the world of haute cuisine following two major rules: an attention to what my local cuisine has to offer and to its reinterpretation. At first glance, it may seem something easy to do, but it is not.

It was very important to be born in a family where “cookery is everything”, that instilled in me --veneration for the past and for traditions.

My cuisine renews itself constantly, so the kitchen of “Bye Bye Blues” is like a culinary theatre where the dishes are a representative of the lives changing. I use only zero-mile ingredients, local products and only according to what the season has to offer, guaranteeing the freshness and the quality of what is brought to the table.

My basic rules are: do everything in agreement with my soul and my heart, always be very careful about customer needs and keep the human factor in mind both interrelations with my staff and my suppliers.

— What cuisine are you an adherent of?

Certainly, in my dishes there is an Asian influence because my sous-chef is Japanese. He has arrived to Sicily in 2003 for a stage in order to improve his culinary skills and never left us. My traditional heartening “comfort food” encounters a little bit of Japanese style, but my food is not a fusion food. You can find its touch in the care and attention to the plate.

— What is your favourite dish?

I love desserts as every Sicilian does.

— How can you describe the meaning of a phrase “Who is the chef”?

In my opinion, the chef is someone who maintains his identity. He has to know how important traditions and the territory where he was born are.

— What is it like to be the only female chef with a Michelin star in Sicily?  It’s a beautiful thing and it was such an honour but at the same time it was hard because especially in Sicily this is a men’s world, it took a great determination and a lot of effort.

— Tell us about your restaurant in Brazil. What is the concept? What cuisine is in the restaurant? Why Brazil?

My husband and I decided to open a restaurant in Brazil because we have always loved spreading our traditions and our Mediterranean culture. Certainly, it is a food where a taste of the south is always perceptible and I use ingredients similar to our home ingredients. Also we bring some raw materials from Sicily.

We have been to Brazil many times and immediately fell in love with this country, with all its contrasts and its wonderful nature. We also have friends there who helped us.

— Tell us about your plans for the future. Are you going to open new restaurants in Italy or other countries?

I love to have new projects and it is something that keeps me alive and full of energy. I’m planning a collaboration in Taiwan but I don’t want to talk about it yet.

— What features of your cuisine helped you to receive a Michelin star?

I think it was the feeling on my kitchen of an idea of constant renews without forgetting the starting point and my background. Moreover, it is about having a restless soul that always leads me to new horizons.