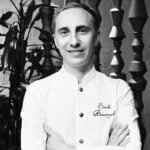 “Ukrainian Fusion. How to create a wow effect based on simple local products"

Sergey has 16 years of experience in the restaurant business, 12 of which he has been working as a chef.

He is the Brand Chef of the contemporary Ukrainian cuisine restaurant Barvy, which has been nominated three times for “Best Ukrainian Cuisine Restaurant” by the National SALT restaurant awards, winning it in 2017.

He is a co-founder of “The first Ukrainian FoodPairing laboratory”, as well as one of the 25 best chefs of Ukraine by Focus magazine. He won “Ukraine’s Best Dessert” at DGF International Culinary Concept, as well as the BarmanDictat foodpairing competition taking the first place. He prefers fusion style and experiments with unusual combinations of taste, such as pear — chestnut, pike caviar — mushrooms, beet — cherry, chicken — buckthorns, etc.

He upgraded his skills at the Basque Culinary Center. In order to become more familiar with Scandinavian cuisine, he took an apprenticeship at one of the best restaurants in Estonia Cru (Tallinn) and was mentored by Dmitriy Halyukov. He is a frequent participant and speaker at various cooking events and a judge at cooking competitions. Sergey organizes and conducts cooking master classes all over Ukraine.