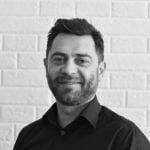 Sergei’s relations with the professional kitchen started in the 9th grade at school, when he chose the profession of the cook as an additional education. Many years after that passed in building a career not at cooking, but in business. At this time, in 2010, Sergei began to get interested in cooking again, to cook, to travel, to blog in Facebook, becoming one of the most notable culinary authors. This has not gone unnoticed and in 2011 he started publishing his famous series of interviews in Forbes magazine with the best chefs of the world, including Massimo Bottura, Andoni Aduriz, Arzak family, Alain Passard, Heinz Beck, Alain Ducasse and many other outstanding personalities.

And after that there was a culinary career on the STB television channel. Expert in the projects «Vse Bude Dobre», «Vse Bude Smashchno» and the judge on «MasterChef» - he immersed in culinary TV for 5 years, becoming a «television chef». During this time, there were many other culinary projects, but, in the end, business world won the culinary, and Sergei again returned to the financial business.