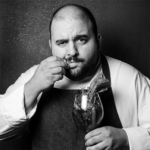 Tiago Emanuel Santos, a native of the parish of Sarilhos Pequenos near Lisbon finds himself in the roots of his ancestors who were fishermen. There down by the Tagus river he discovered his roots and origins, which ignite the fire of Tiago’s cuisine. He manages to intertwine Portuguese traditions with technology and creativity bringing this country’s gastronomy to a whole new gastronomic level.

At the age of 31 already being a new great value of Portuguese cuisine, he has contributed to numerous projects and establishments like a multinational group with interests in Portugal and Venezuela Montepinto Group as Executive Chef; Kenwood Group in Portugal as their Ambassador; Quorum Restaurant in Lisbon as Head Chef; O Baco Restaurant as Consultant Chef; and Creative Food and Beverage Manager of a big hotel chain in the Azores Islands Ciprotur Hotel Group.

A graduate in Geography and Regional Planning, he followed his training in cooking through the Estoril School of Hospitality and later Harvard University, John Paul from Haute Cuisine to Soft Science Matter.